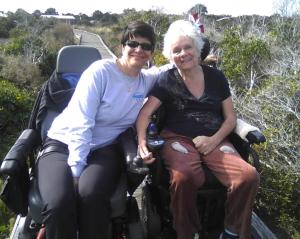 And you guys think I’m gutsy. Meet Diana Lain. More positive, more adventurous, more disabled than me. And more full of life than most anyone I know, able-bodied or otherwise.

It’s not often I meet someone with this much gumption. She’s game for anything and loves speed. Some of you may recognize her from other adaptive sport photos. She waterskis, body surfs and plays power soccer (driving the ball into the goal with a power wheelchair.) Not to mention, occasionally joins in on bowling and billiards nights. All this is made more remarkable because she doesn’t have much use of her limbs.

Diana was diagnosed with multiple sclerosis in 1992 and has lived with friend, caregiver and trusty sidekick, Kathy Bailey, for close to 10 years (read the recent article that appeared in The Florida Times-Union.) I don’t remember actually meeting them. It seems, instead, they’ve always been there, giving me countless rides in their wheelchair van since my own disability, and becoming my good friends along the way.

So, I didn’t hesitate when they invited me to check out Little Talbot Island on New Year’s Day. The park has plenty of boardwalks, bike trails and accessible restrooms, so it didn’t feel I was living too close to the edge. I forgot who my companions were.

Our first escapade came when Diana spotted a seagull with a broken wing in a parking lot. I think I have a bleeding heart when it comes to creatures of nature. Next to Diana, I’m the hunter poised to take out Bambi’s mom.

Diana insisted we stop and sent Kathy off with some half-baked plan to catch the bird with my scarf and return it to the car so we could drive it back to the park rangers. This idea was crazier than Charlie Sheen (I just watched him on Dr. Oz, so pardon the metaphor, but he is.) First, there was the unlikelihood of capturing the bird. Then, there was the problem of what to do with it during the drive back to the entrance. We had no bucket, no box, no container of any kind, except an ice chest full of our lunch and some canvas bags.

“I can hold it on my lap.” Diana said. Really? An angry, panicked seagull held by a woman with compromised strength and motor control, stuck in a wheelchair? I envisioned Kathy trying to drive while a terrified, sqwaking bird flailed about the van. Luckily, I proved to be the voice of reason and Diana was willing to concede that her plan had some holes. But Kathy, ever the helpful and patient caregiver, had already disappeared behind a bush with my scarf. (My mom would’ve simply ignored me and never left the vehicle.)

That’s the problem (if there is such a thing) with strong, passionate, disabled women. We usually act on impulse, forgetting we can no longer do things. I once lunged for Bella as she was heading out the door and fell out of my wheelchair. Diana’s impulse was to help the bird. My impulse was to keep my cat indoors, which I succeeded in doing — she was scared back in when I took the nose dive.

Sometimes, this confidence serves us well, driving us to do things like adaptive waterskiing or surfing or things we’ve never tried before. Diana and I have plans to go adaptive golfing. I’m not remotely interested in the sport, but figure riding around in the cart and drinking will be fun.

Diana has more spunk than me, though. Once we honked the horn for Kathy to return and saw the gull safely rescued by the rangers, we were free to explore. Diana preferred true nature trails and didn’t let things like the end of a boardwalk or soft sand keep her from going where she wanted to go. She forged ahead while I worried about getting stuck and hung back.

So, next time you’re feeling too chicken to try something, or too lazy to get off the couch and workout or go for a walk in nature, think about this amazing woman. If Diana’s life teaches the rest of us anything it is this: be grateful and be gutsy.

From Down Here, On An Adventure