Otherwise known as “Why I Live at the Beach.” Seriously, I don’t mean to sound like a beach snob, but it was 9:00 a.m. On a Thursday. And we walked there. Well, I didn’t walk, obviously, but it was an extremely short ride in the beach wheelchair.

My friend, Michele, and her daughter, Annie, took me out kayaking. At first, we weren’t sure we were going. It wasn’t the calmest day we could’ve picked, but I voted to go for it. Michele had a day off. Annie was only in town for another week. The stars were aligned.

Once we made it out past where the waves were breaking (I was instructed to lean back,) it was smooth sailing. Annie swam out to us and climbed in the middle of the two-person kayak. I have no idea how she did this. It took place behind me and I was scared to turn my head for fear of tipping us over. Suffice it to say, she slipped in the boat like some kind of Navy Seal.

I, on the other hand, was given a paddle that sat uselessly in my lap after I demonstrated my paddling skills – wildly slapping the water or grazing it enough to make forward movement very difficult.

Free to simply enjoy the ride I said, “It’d be perfect if we saw some dolphins.”

And what do you think happened next?

Michele and Annie spotted three dolphins. My eyesight’s so poor, I hardly ever see them from the shore anymore. I know they’re out there, because people have tried to point them out, but they’re usually too far away. We must have been 10 yards from these three. Close enough to hear them breathe.

Returning to shore didn’t go quite as smoothly. We tipped over in a wave and spilled out. But I didn’t mind. Even when snow skiing, falling was my favorite part. Besides, I was wearing a life jacket. Michele and I played in the surf. She was looking for the hat she’d lost when we capsized. I was trying not to drown. Swimming in the ocean is probably something many of you take for granted. I don’t anymore.

It didn’t escape my attention that the date was October 4th. Exactly six years since the brain surgery that saved me. Not a bad day, or way, to celebrate life. 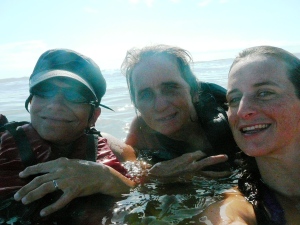 Have Power Chair … Will Travel

I am SICK TO DEATH of bumming rides.  (Okay, I know it’s a cliche’, but I can’t think of anything original.  Fellow writers, help me out here.)  Since I don’t drive, I’m forever asking favors.  Do you mind and could you please take me to the drugstore/grocery store/doctor’s office?  With my mother recovering from an illness and also unable to drive, it’s really starting to wear on me (yes, another cliche’.)  One thing I’ve learned being disabled, people genuinely want to help.  It makes others feel good.  It makes me feel like an eight year old in tights being chauffeured to gymnastics.

If you’re beach bound only, there’s also Dial-A-Ride.  I experimented with that service last week.  First, there was no answer.  This did not bode well for Dial-A-Ride.  Or for me.  Then, though I had called the required 24 hours in advance, they were all booked up.  When I picked a different day, they told me what time I would be going shopping.  I had to be available all day.  Hey, I’m disabled, right?  I have nothing better to do. END_OF_DOCUMENT_TOKEN_TO_BE_REPLACED

Sooner Than I Thought

For those of you who don’t know me, my name is Amy and I’m currently working on a book, Misadventures of a Happy Heart: A Memoir of Life Beyond Disability. The working title really tells you a lot about this blog and its categories.  There’s On An Adventure (or misadventure as the case may be,) my perspective on life as a recently disabled person (From Down Here,) and my happy heart (or overall positive outlook.) END_OF_DOCUMENT_TOKEN_TO_BE_REPLACED