Enough has been said about writers and artists being a pessimistic bunch.  In fact, they are so well known for being depressed, addicted and suicidal that many beginning talents think they have to be down and drunk to enjoy any real creative success!  So, I’m here to talk about that supposed anomaly — the happy artist.

Plenty of creators were positive people.  Charles Dickens, Ralph Waldo Emerson, and Samuel Johnson (considered one of the most important authors of all time for publishing the Dictionary of the English Language) were all optimists.  Paulo Coelho is a positive Brazilian author, famous for his spiritual teachings and best sellers, including The Alchemist.

Political leaders like Winston Churchill, Abraham Lincoln and Mahatma Gandhi were all eternal optimists, along with inventor, Henry T. Ford, and the man whose name will forever be synonymous with “genius,” Albert Einstein.

Robert Brault, a well known and frequently quoted writer said it best when he said, “After 5,000 years of recorded human history, you wonder, what part of 2,000,000 sunrises doesn’t a pessimist understand?”

In a Newsweek article on optimism it was reported that “researchers have claimed that a positive outlook motivates us to plan for our future and may even have an effect on our long-term physical health.  It’s increasingly clear that your mental outlook can have a big effect on your physical health.”

I’ve been accused of being a Pollyanna, but I don’t really mind.  I’m the kind of person that doesn’t watch the news.  This drives my activist mother crazy.  She believes it’s important to stay informed and get involved.  CNN is on constantly at her house.  But, I can’t live on a diet of murder and mayhem.  I find out about hurricanes when there’s long lines at the grocery store. 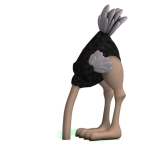 I guess I’m sticking my head in the sand, but I was validated by Dr.Andrew Weil’s book Spontaneous Healing.  He recommends “news fasts” as part of his program to a more efficient healing system.  It’s easy to forget we have a choice as to whether we let negative information into our minds.

And for those beginning talents out there, remember what Helen Keller said, “No pessimist ever discovered the secret of the stars, or sailed to an unchartered land, or opened a new doorway for the human spirit.”